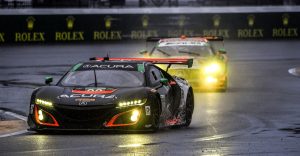 The #86 Michael Shank Racing Acura NSX GT3 driven by Jeff Segal, Ryan Hunter-Reay, Ozz Negri and Tom Dyer finished fifth in the GTD class, and won the opening round of the North American Endurance Championship, Sunday at the Rolex 24.

DAYTONA BEACH, Fla. – The Acura NSX GT3 completed a highly successful endurance sports car racing debut Saturday and Sunday at the Daytona International Speedway in Florida, as a pair of Michael Shank Racing Acuras dominated the nighttime hours, leading 171 of 634 laps, prior to a best finish of fifth in the 27-car GTD field at the season-opening Rolex 24.

This weekend’s endurance classic marked the North American sports car racing debut for the Acura NSX GT3, with the MSR team fielding a pair of cars for a stellar driving lineup including Andy Lally, Graham Rahal, Katherine Legge and Mark Wilkins in the #93 car; and Jeff Segal, Ryan Hunter-Reay, Oswaldo “Ozz” Negri Jr., and Tom Dyer in the #86 NSX.

The Acura NSX GT3s starred in the overnight hours of the twice-around-the-clock contest, leading – and often running 1-2 – as both cars excelled in the steady rain and wet track conditions that existed from just past 8 p.m. Saturday until 10 a.m. Sunday, when the rain faded away and the 3.56-mile circuit finally began to dry.  In all, the two NSX GT3s led 171 of 634 laps, or 27 percent of the total distance run.

In the closing hours, both cars appeared headed for top-six finishes.  But with just 30 minutes remaining, the #93 NSX GT3 was forced to retire due to damage sustained in earlier on-track incident.  But Segal was able to bring the #86 Acura home fifth in the GTD class, and also claim North American Endurance Championship honors for the “series-within-a-series” of endurance races within the overall IMSA WeatherTech SportsCar Championship.

Competing in the GTD class of the sports car racing championship, the NSX GT3s race against premium automotive brands including Aston Martin, Audi, BMW, Ferrari, Lamborghini, Lexus, Mercedes-Benz and Porsche. In all, there were 27 cars entered in the GTD field at Daytona, by far the largest of the four classes competing in the 24-hour endurance contest.

Developed from the production Acura NSX, the NSX GT3 utilizes the production NSX’s ultra-rigid and lightweight multi-material body with aluminum-intensive space frame, which is produced at the Performance Manufacturing Center in Ohio, exclusive worldwide manufacturing facility for the NSX. The 3.5-liter racing engine uses the same design specifications as the production Acura NSX, including the block, heads, valve train, crankshaft, pistons and dry-sump lubrication system. A six-speed, sequential-shift racing gearbox delivers power to the rear wheels.

Video recaps from this weekend’s Acura WeatherTech SportsCar Championship activities at Daytona are being posted on the “Honda Racing/HPD” YouTube channel.  Produced by the Carolinas Production Group, the video packages can be found in the 2017 HPD Trackside Video Playlist at: https://www.youtube.com/HondaRacingHPDTV.

The 2017 WeatherTech SportsCar Championship resumes Saturday, March 18, with another endurance racing classic, the 65th running of the Mobil 1 Twelve Hours of Sebring.

Posted at CarCare.org here… With the hot summer temperatures on the rise, knowing the symptoms of a sick cooling system are critical to your summer driving plans, since cooling system

While current supplies last. Please stop by for a demonstration and test drive.                   Click on image for larger version.

Jeremy Anwyl, asked that question in this interesting piece for Edmunds.com recently. As prices have dropped since Spring, there has been a shift back toward larger vehicles. This is proof