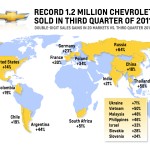 “Nine months of record sales is a great testament to the strength of Chevrolet’s products and service,” said Chris Perry, vice president, Chevrolet global marketing and strategy. “That success would not be possible without first connecting with new customers individually – no matter where they live – listening to their needs, and then welcoming them to the Chevrolet family.”

That customer-focused approach is best illustrated by the successful U.S. launch of the Cruze compact sedan. Chevrolet sold more than 175,000 Cruzes worldwide in the third quarter of 2011, fueled by U.S. and China sales growth. More than 970,000 Cruzes have been sold since it was introduced in early 2009, and the 1 millionth Cruze is expected to sell by the end of October.”

Check out our newest pre-owned arrival, a 2012 Chevrolet Cruze Sedan, and more here…