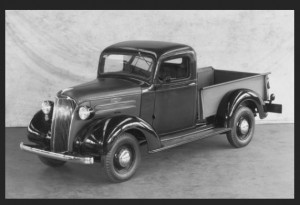 DETROIT – 2012-09-27 – It started with a simple idea – a few car chassis fitted with hand-built beds to help carry materials around a booming car factory. Before long, millions of Chevrolet pickups were woven into the fabric of a fast-growing country. Chevy trucks tackled the toughest jobs on farms and in the fields, hauled tools and lumber to the burgeoning suburbs and carried families and friends into the wilds for well-earned vacations.

“The legacy that Chevrolet trucks have built over the last 95 years is important to protect,” said Don Johnson, Chevrolet vice president of Sales and Service.  “The best way for us to do that is by delivering the capability and technology our customers have grown to expect, in both our current trucks and in our next generation of full-size pickups.”

Here are some Chevy truck highlights: (read on or click here… for the original article)

Although there are indications that some Four-Ninety based trucks were built for internal use in 1916, and that a few even earlier chassis may have been converted to ambulances and sent to France in 1914, the first customer chassis appears to have been built in Flint, Mich., on Nov. 22, 1916, and shipped from the factory on Dec. 2 that year.

Two four-cylinder models marked Chevrolet’s formal entry into the truck market for the 1918 model year. Both were cowl chassis units that came from the factory with only frontal sheet metal. It was customary at the time for buyers to obtain a wooden cab and cargo box or panel van body to suit their purposes.

Priced at $595, the half-ton Light Delivery cowl chassis was essentially a bodyless Chevrolet Four Ninety car equipped with stronger rear springs. Mounted with a pickup box or panel body, it provided an agile and economical light-delivery truck for small businesses popping up across America in the boom following the First World War.

The second model, a 1-ton capacity 1918 Chevrolet “Model T” (presumably for “Truck”) cost $1,125 without a body.  It was based on the FA-series car, and was built on a truck frame that was longer and stronger than the half-ton model.  A 37-horsepower engine gave the larger truck the power to haul heavier loads at a governor-limited top speed of 25 mph.

The simple cowl chassis models were replaced in the 1930s by factory-built pickups, which initially came with roadster and closed bodies.  Chevrolet bought the Martin-Parry body company in 1930 and quickly began selling steel-body half-ton pickups complete with a factory-installed bed.

By the mid-1930s, half-ton pickups with factory-installed steel boxes had become the lifeblood of the truck market, with brands like Mack, Studebaker, Reo, and International competing with Chevy, GMC, Ford and Dodge.

In the mid-1930s, as the U.S. economy began to recover from the Great Depression, Chevrolet pushed for leadership in a reviving truck market with what were designed to be some of the strongest, most innovative models produced to that point.

For 1937, Chevrolet introduced new trucks with streamlined styling that many still consider the best designs of the era. The ’37 also featured a sturdier body and a larger and more powerful 78-horsepower engine, among other improvements.

A 1937 Chevrolet half-ton pickup was sent on a 10,245-mile drive around the United States that was monitored by the American Automobile Association (AAA).  Carrying a 1,060 lb. load, the truck averaged 20.74 miles per gallon.

In early 1947, Chevrolet introduced its Advance-Design trucks, the first completely redesigned GM vehicles to appear following World War II. Owners of earlier pickup models had asked for a roomier, more comfortable cab with improved visibility and a wider pickup box. They got all of that and more.

Designers sought to make the truck’s styling clean, brisk and attractive. Headlamps were now set wide apart in the front fenders and five horizontal bars made up the grille. The design was produced with few major changes from 1947 through 1953, and was then continued with a new frontal appearance into early 1955.

During the Advance-Design trucks’ run, there was a measurable shift among Chevrolet customers to trucks. Prior to World War II, the production ratio of the brand’s cars to trucks had been about 4:1. By 1950 – the year Chevrolet became the first brand to sell more than 2 million vehicles in a single year – the ratio of cars to trucks was closer to 2.5:1.

By the mid-1950s, the post-World-War II boom was under way, and customers were looking for style and performance even in pickup trucks.  In mid-1955, Chevrolet introduced the all-new Task Force trucks, which shared design language with the 1955 Bel Air, and also offered the new small-block Chevy V8 as an option.

Also new to the 1955 truck line was the Cameo Carrier, a high-styled gentleman’s pickup more at home in a trendy suburban California bungalow driveway than on a farm or in a factory yard.  The Cameo Carrier was only produced through 1958, but it set the stage for new generations of well-equipped personal use pickups, including the El Camino, Avalanche, and Silverado crew cab.

A major engineering advance with tremendous future implications was announced for 1957, when a factory-installed 4-wheel-drive system became available for the first time on select models.

The original El Camino introduced for 1959 combined the dramatically finned styling of that period’s Chevrolet cars with half-ton pickup utility. But the excitement was short-lived. After 1960, the El Camino went on a three-year hiatus.

Chevrolet revived the El Camino “personal pickup” concept for 1964, with a new version based on that year’s new mid-size Chevrolet Chevelle. During the ‘muscle car’ era that followed, El Camino buyers could order their truck with a Chevrolet high-performance big-block V-8 powertrain, creating a sport pickup that could “haul” in more ways than one. By 1968, a complete Super Sport package was available.

The Chevelle El Camino enjoyed a devoted following and was produced through two more styling generations (1968-1972 and 1973-1977).  For 1978, the El Camino was successfully transitioned to that year’s new, smaller Malibu platform. The final El Caminos were 1987 models.

Although there had been a number of small pickups prior to the 1960s, the compact car boom that kicked off the decade brought with it a new crop of forward control trucks, including the Corvair 95. With its unitized body structure and rear-mounted engine, the 95 offered a lot of cargo space in a compact maneuverable package. The Rampside model offered a side gate on the right side of the vehicle, which allowed easy access to the low load floor at the front of the bed.  Although clever in design, the Corvair 95 never caught on in the showroom, and in the final model year of 1964, only 851 were sold.

It took only one glance at any of the 35 Chevrolet C/K models for 1967 to see that Chevy trucks had a new look that year. The exterior profile, which would characterize Chevrolet C/K models through 1972, featured a lower-silhouette cab and large, rounded wheel openings. The new chassis had coil springs front and rear.

A new-for-1967 Custom Sport Truck package was a trend-setting option that included deluxe, car-like upgrades inside and out. The package could even be ordered in combination with bucket seats.

By 1967, the Federal Interstate Highway System was giving Americans unprecedented access to the nation’s natural wonders and recreational areas. Customers who enjoyed such pursuits appreciated the small-block and big-block V-8 power choices that gave Chevrolet trucks the torque needed to pull trailers up grades, and horsepower to cruise comfortably with a camper at Interstate speeds.

In spring of 1972, Chevrolet started selling the LUV pickup on costal markets.  Built by GM partner Isuzu, the LUV featured a 75-horsepower four-cylinder engine and four-speed manual transmission.  Although the specs were modest, the LUV was a fully functioning pickup, with a ladder-style frame, a six-foot bed, and a payload of 1,100 pounds, plus room for two passengers.  Within a few years, soaring gas prices would make compact pickups like the Chevy LUV a major factor in the U.S. truck market, and it wasn’t long before Chevrolet started work on a home-grown small truck.

The Chevrolet S-10 was the first domestically produced compact pickup, larger than the imported Chevy LUV but smaller than the full size C/K model.  An 82-horsepower four-cylinder engine was standard, with an available 110-horsepower V6 – the only one in the class.  Properly equipped, the S-10 could haul 1,500 pounds, and tow 4,000. The roomy cab and high levels of standard and optional equipment gave the S-10 a broader appeal than that of earlier, bare-bones small trucks, and it quickly became a mainstay of the Chevrolet lineup, appealing to everyone from young customers looking for a first set of wheels to businesses seeking a rugged work truck.

Pickup trucks had been slowly migrating from the worksite to the suburbs, and the 1988 Chevrolet C/K pickup accelerated that trend, bringing the aerodynamics, electronics and materials that had revolutionized the automobile over the past decade to the full-size pickup.  Extensively tested to make sure it met the high bar for dependability set by previous Chevy pickups, the new truck also featured advanced aerodynamics for improved fuel economy, including a narrower cab for lower drag, flush side glass, and a sleek front end with integrated lamps.

A full range of powertrains was offered, from a 4.3-liter V6 through a 6.2-liter diesel V8.  To enhance durability, the trucks featured extensive use of galvanized steel for corrosion resistance, and a full welded frame with a boxed front section for strength and rigidity.   Civilized driving characteristics and styling moved full-size pickups closer to being the family vehicles they are today.

Chevrolet’s all-new 1999 full-size pickups were the first to carry the Silverado nameplate.  The new trucks resulted from the most intensive development program yet undertaken by General Motors and they arrived just in time for a boom in truck sales.  The styling of the new Silverado pickups built on the purposeful design that characterized the preceding C/K pickups. Interiors had all the comfort and convenience features personal-use customers were starting to expect.  Power came from a new generation of V8 engines.

The 2002 Chevrolet Avalanche pioneered the idea of a light-duty pickup that could comfortably accommodate the family, and the 2004 Silverado took this idea and ran with it. In less than eight years, light-duty crew cabs would dominate the full-size pickup market, accounting for more than two-thirds of all sales, and transforming pickups into a true multi-purpose vehicle for both work and family. Available creature comforts included dual-zone climate control, Bose sound systems, a rear-seat DVD player, OnStar and XM radio. Even with the creature comforts, Silverado maintained the Chevy truck capability.

The all-new 2007 Silverado provided significant improvements in performance and fuel economy, while strengthening the capability and dependability Chevy pickups were known for.  It featured a new fully boxed frame, coil-over-shock front suspension, and rack-and-pinion steering for improved ride and handling, while new Gen IV small-block 5.3L and 6.0L V-8 engines could deactivate four of the eight cylinders when not needed to save fuel.  Safety advances included StabiliTrak electronic stability control and head-curtain side airbags for enhanced occupant protection.

Just as full-size pickups have become the lifeblood of the American economy, midsize pickups are important vehicles for businesses and families in many countries outside the United States. Chevrolet’s new global mid-size Colorado pickup is designed to help expand the Chevrolet brand into many of the world’s fastest-growing markets.

Developed under the direction of a truck-savvy team from GM do Brasil, the inaugural version of the global Colorado was launched in Thailand, the world’s largest market for midsize pickups, in November, 2011.  Over the next several years, Colorado will be introduced into many global markets, including the United States, where it will offer a more fuel efficient alternative for customers who don’t need all of the capability of a full-size pickup.

Founded in 1911 in Detroit, Chevrolet is now one of the world’s largest car brands, doing business in more than 140 countries and selling more than 4 million cars and trucks a year. Chevrolet provides customers with fuel-efficient vehicles that feature spirited performance, expressive design and high quality. More information on Chevrolet models can be found at www.chevrolet.com. 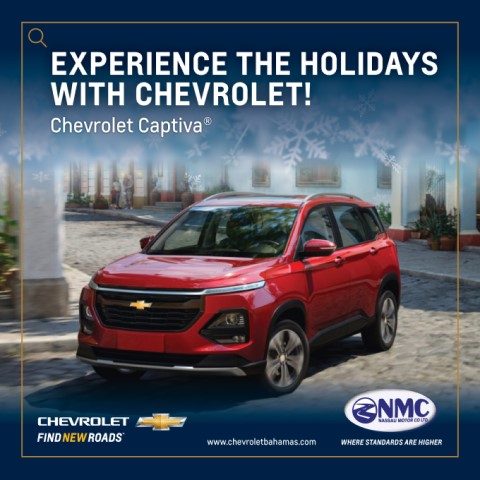 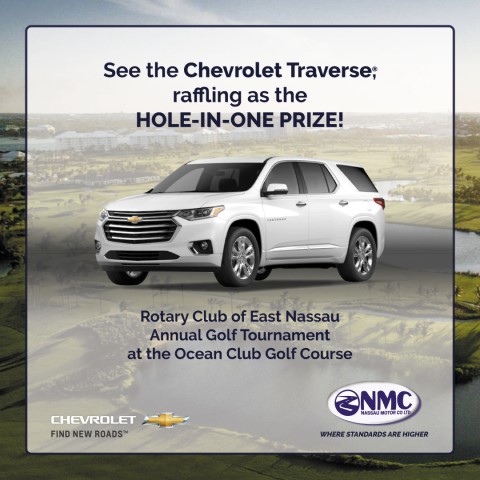 Friday, October 15, 2021 at the Rotary Club of East Nassau Golf Tournament for Charity