Chevrolet to be Official Automotive Partner of Liverpool FC

DETROIT, Michigan.- Chevrolet has announced that it is entering into a four-year agreement with Liverpool Football Club to become its Official Automotive Partner.

The partnership runs to the end of the 2015/16 Barclays Premier League and European campaigns, and includes visibility for the brand at Anfield, Liverpool’s home ground; editorial opportunities within the Club’s print and digital publications and fan sites; and player appearances for commercial opportunities.

Chevrolet is also an official sponsor for the Club’s Pre Season Tour, one of the most popular in the world, which has already seen Liverpool play Toronto FC last Saturday. Liverpool will play Italian giants, AS Roma tomorrow at Fenway Park in Boston and on July 28, Liverpool will play English Premier League rivals, Tottenham Hotspur in Baltimore.

“Liverpool supporters from around the world are known for their undying love of their side, said Global Chevrolet Marketing Vice President Chris Perry. “Our relationship with Liverpool FC extends beyond the traditional boundaries of sponsorship and is about engaging with supporters. Everything we do will be aimed at keeping them at the center of the game.”

Said Ian Ayre, managing director of Liverpool Football Club: “Much like our Club, Chevrolet has a long, rich history with a growing, global brand and this landmark partnership once again demonstrates the value of Liverpool’s international appeal.

“Partnerships with blue chip brands like Chevy will help ensure the long-term growth and success of our Club, both on-and-off the pitch. We look forward to working closely with Chevy to help reach and engage our supporters, who are among the most passionate and educated fans in the world.”

For more information about the LFC North American Tour 2012 and to purchase tickets, visit www.lfctour.com.

A classic! Not sure either of us would like to be that sales consultant for that test drive. 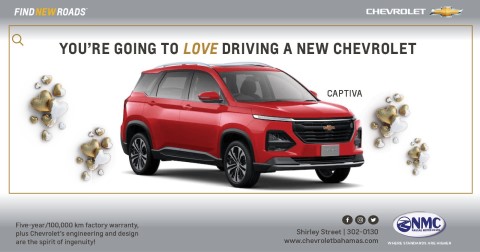 For a great family fun day, head out to the “Fish Fry” at Arawak Cay for the Antique Auto Club of The Bahamas annual show and steak out in aid