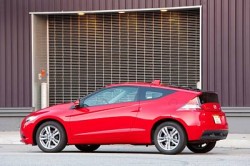 Honda is planning to offer a turbocharged engine option in late 2011 in its CR-Z hybrid coupe. The engine, a forced-induction 1.6-liter four-cylinder, may be offered in two variants, including a 200-horsepower edition that could be earmarked for the new CR-Z Type R.

According to Britain’s Autocar, Honda wants to broaden the appeal of the CR-Z and thinks a performance version could have considerable appeal, especially in export markets such as the U.S. and the U.K.

The current CR-V is one of the best-selling vehicles in the country. The 2012 is an improvement in every way, [More…] Visit Honda for more photo’s here… Some equipment may